Maps were disabled by the visitor on this site. Click to open the map in a new window.

THINGS TO DO AROUND DORNOCH 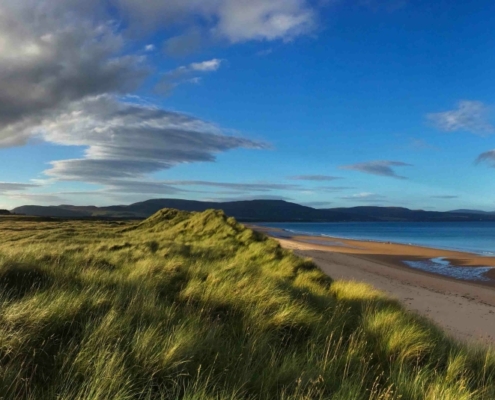 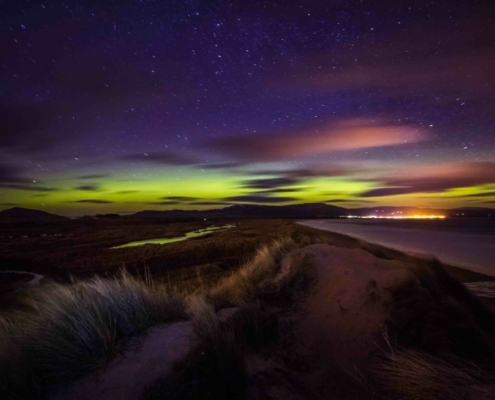 GOLFING, FISHING, WALKING & VERY MANY OTHER ACTIVITIES TO ENJOY

For lovers of The Great Outdoors, there are no end of things to entertain you around Dornoch. Luckily, the relatively dry climate* in this part of the North-East coast means it is enjoyable on more days than you might think! However, on the days when “the weather” has come in, there are also many activities to enjoy inside.

*Just in case you are sceptical about this statement, The Met Office records show annual rainfall here as just 64.6 cm (while on the West coast in Skye, it is over 203 cm). This is actually lower than in the south of England, where Wisley in Surrey has average rainfall of 65.6 cm!

See if any of these things catch your fancy…

From walking along the white sands of Dornoch or Embo Beach, to joining the fearsome Old Duke of Sutherland at the summit of Ben Bhraggie, there are walks around Dornoch for all abilities and inclinations. We normally set off in the morning and take a picnic with us; often we don’t meet any other people along the way. There are many maps and suggestions in the house which will help you sort out your ideal route. Alternatively, if you’d like a guided walk somewhere guaranteeably fabulous, do contact Irene at Adventura Scotland, – she’s based in Embo. 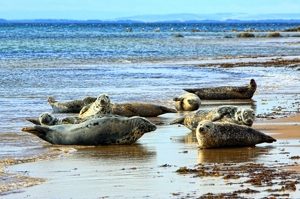 Loch Fleet Nature Reserve, walking distance from Embo House, is a large tidal basin with sand dunes, mudflats, coastal heath and pinewoods. The pinewoods support Scottish crossbills, crested tits and pine martens, as well as woodland plants, such as one-flowered wintergreens. Highlights of the area include all kinds of wading birds plus otters, seals and wild orchids

The Falls of Shin near Lairg. This spot is famous locally as it is great for watching Salmon leap the waterfall as they migrate upstream to their spawning grounds in the Summer. There is also a very nice coffee shop & restaurant (Mac & Wild) next to the car park. 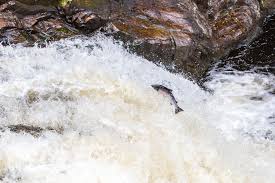 Salmon at the Falls of Shin

Organised Whale and dolphin watching is available in the Cromarty and Moray Firths, between Dornoch and Inverness.

Birding. The South East of Sutherland has a good range of habitats making the area exceptionally bird rich, though this is especially true of the coast, with large numbers of ducks, geese, waders and gulls. Red and Black Grouse can be seen in the hills, as can a variety of raptors, although Golden Eagles are scarce.​

A ghillie can usually be arranged with a bit of notice. Feel free to call Jim on 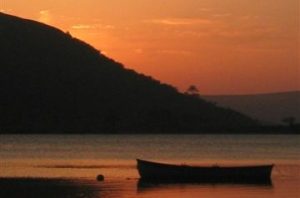 Lochs: The area around Dornoch is surrounded by numerous lochs, invariably in peaceful, beautiful and sometimes spectacular surrounds. Local licenses for the Dornoch area can be purchased by the day from the Eagle pub in Castle St, enabling them to be fished from bank or boat. Wild brown trout are a quarry common to all these lochs, but some are also stocked with rainbows and char. There is abundant fishing further afield, including at Loch Brora through which pass salmon and sea-trout, and at Loch Eye near Tain, where the nutrient rich waters sustain brown trout of 5lb or more.

Rivers: For the experienced fisherman it may be possible to arrange fishing for salmon or sea trout at one of the nearby rivers – such as the Fleet, Shin, Brora or Alness – or at the Kyle of Sutherland. Again, do call Jim to discuss your requirements and he will liaise with the local estates.

Sea: For those who fancy a walk down to the nearby shore, fish such as mackerel and skate can be caught from the beach. There are a couple of spare rods and tackle in the house for your use. And later on, at the right time of the year, you might even catch a glimpse of the Northern Lights which are often spotted from Embo beach.

Sutherland’s roads are amongst the quietest in the entire UK, and mixed with breath-taking scenery, this makes for great cycling. Bikes can be hired from Grannie’s Heilan’ Hame in Embo, or they can be delivered to the house from Sam’s Bike Shed in Golspie. 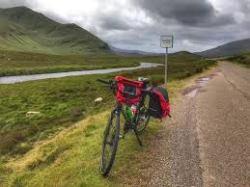 Road Cycling. There are any number of Ordnance Survey maps in the house, for you to find your ideal cycling route. If you are feeling energetic, you might consider trying some or all of the increasingly famous “North Coast 500” route, which makes a huge, 500 mile circle around the north of Scotland.

Mountain Biking. Highland Wildcat Trails, Golspie, is a purpose-built mountain bike course set in magnificent Highland scenery, just north of Dornoch, while a little inland and to the west, the ‘Kyle of Sutherland’ mountain bike trail offers more of a woodland experience. 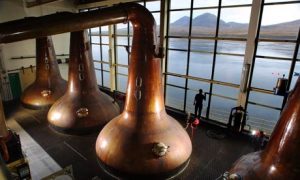 The Highlands are rightly famous for their malt whiskies and Embo House is happily placed in an area which allows you to learn as much as you want about Scotland’s national drink. Six famous distilleries are within an easy drive: Glenmorangie, Balblair, Clynelish, Dalmore, Glen Ord and Old Pulteney. It is easy to arrange a tour.

It’s not just the distilleries which are serving! Visit ‘The Whisky Bar’ in the Castle Hotel Dornoch. It has won many awards and has a vast collection of the finest whiskies in the land. The Carnegie Whisky Cellars in the Courthouse in Castle St. is happy to arrange tastings and pack you off with whisky which will last you the rest of the year, – or just sit and sip your own favourite in Embo House’s own Whisky bar (with honesty tab). 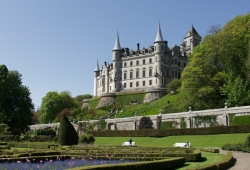 The name Sutherland dates from the era of Viking rule. So although this county contains some of the northernmost land in the UK, it was called Suðrland or “southern land” by its Norwegian rulers. Norse, Pictish and more recent Scottish history involving bloody battles and the notorious “Highland Clearances” of Victorian times are all around. We recommend visiting some or all of the following: 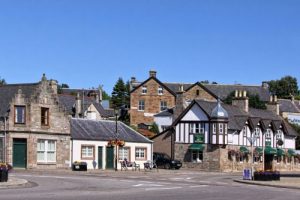 Dornoch contains a number of general grocery stores, plus specialist butchers, bakers, bookshop, hardware and electrical stores, amongst others. There is also a very good antique shop and a number of fantastic gift shops, most notably The Jail, situated in the middle of the village in…. the old town jail!

Just over the Dornoch Firth in Tain, there are a number of other interesting shops, not least Bannermans fish shop for local seafood and The Tain Pottery shop. (If you’re interested in Potteries, you also won’t want to miss the Anta Pottery, which is a little further south.) There are also a number of large supermarkets in Tain.

Aspen Spa at the Carnegie Courthouse (next to the Jail) is a haven of calm and a perfect retreat after a day on the golf course, or a break from a busy day sightseeing or shopping. They have a range of face, body and nail treatments for men and women

Dornoch boasts a number of good restaurants and bars to suit a range of tastes. We have a number of up-to-date recommendations in the house, but would especially caution in the Summer or other popular times, that you book in advance if you want to secure a table, as there aren’t quite enough to go round!

Originally identified as Sctotland’s answer to Route 66 in the US, the North Coast 500 (NC500) brings together a route of just over 500 miles of stunning coastal scenery in the far north of Scotland, the NC500 500 is one of the world’s most beautiful road trips. 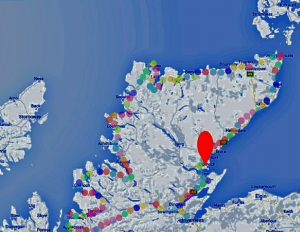 Dornoch: ideal base for NC500 treats!

Whether you explore opulent castles, sample a dram of whisky, take to the water on an exhilarating wildlife safari, or just take in the magnificent scenery  the North Coast 500 offers a truly diverse range of experiences.

These activities and scenes are all within the scope of day trips from your central base in Embo House. And where better than Dornoch to come back to and kick off your shoes after a day of fun in the North Highlands of Scotland!